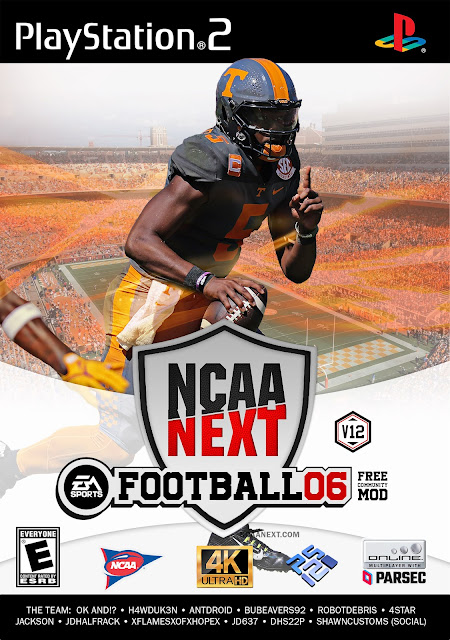 We are pleased to announce the latest NCAA NEXT mod release with V12.1!

Updates and Fixes to V12

Additional alternate uniforms for other teams too by BUBeavers92, Talon, Robot, h4wduk3n, JD637, OK and !?, Antdroid, and others.

Many new uniforms added for teams across FBS and FCS. These are located in Alternates folder!

Talon42 has upgraded many of the bowl game logos and stadium artwork and together Antdroid and him have renamed several bowl names and stadium information to match current day bowl sites.

JDHalfrack has taken the previous transfers mod to overdrive. With some changes to the game code and some save template modding, we've now improved the game logic for who qualifies to be transferred increasing the pool by an order or two of magnitude (including reducing year count, regional restrictions, depth chart restrictions, etc.), removed transfer year eligibility restrictions, changed the transfer cap per team from 3 to 12, and increased the possible transfers database to 1524.

JD637 and BaltimoreRavens have been updating the gear and accessories graphics for a while now. Starting with V12, and with more improvements in V12.1, we've made it so the entire recruiting database can take advantage of some of the new graphic assets created for this mod, and to improve realism to match what players wear in real-life, and improved diversity/skin color.

There's been little tweaks and improvements to the game database to improve the league structure and stability and user interfaces.

Many teams that had missing names on the back of jerseys have had them made visible now with a special in-house tool created by JDHalfrack.

This is a feature that mostly helps the future expansion, if we ever get there, but there is a slight tweak to the BCS calculation formula to take into account having 120 teams instead of the 119 default teams in this mod.

Team logos have had another pass through and updates where needed.

JD637 has updated the previous helmet appearances made by xflamesxofxhopex with some new helmet looks as well.

One of the cool features added in V12 was a fully-working and editable STRMDATA.DB file made possible by JDHalfrack. With that change, we are now able to update all in-game captions, headlines, dialogues, and other strings and features. This update improves upon the V12 changes and adds more dialog and captions variety to the game.

UI Updates and Fixes by Antdroid

There's a bunch of general UI changes to dynasty graphics and updates to sponsor logos and whatnot.

Previously, only User Coaches had stats tracked in a dynasty. With V12.1, we have enabled CPU coaches to have their records and stats tracked and easily viewed in Coach settings at any time.

Oregon "The Duck" Mascot addition by Antdroid and h4wduk3n

The Oregon Duck mascot is now an in-game playable mascot, and is also used for Oregon celebrations!

We have unlocked the ability to add more bowl games to the mod, however, this must be done by the user through DB Editor. With this, users can add two additional conference championship games or bowl games to the schedule. More info in the Wiki!

Touchbacks now are placed at the 25 Yard Line by JDHalfrack

This changes from placement from the old 20 yard line to the 25 yard line, which was made a new rule in 2012 by the NCAA.

The 40 second playclock is now implemented as per NCAA Rule change in 2008. It was previously 25 seconds.