UPDATED FOR V12.3 - NOW WITH CHAMPIONSHIP GAMES FOR NO DIVISION CONFERENCES!

To ADD more championship games, there is one trade-off. You need to substitute existing bowl games and use them as championship games. There's a variety of reasons this is needed for now, but I won't explain them all right now. In the future, we may be able to preserve games, but for now let's just discuss the steps here.

To make this work, we need to add values in the BIDX column of the BOWL database table in your dynasty save file. The BIDX values range from 0 to 32 by default. We will want to add new Conference Championship games starting with 33 and upward. The max value is 37, giving a total of 10 championship games total allowed in this mod.

For each BIDX you add at the end, you need to eliminate the BIDX value of 0, 1, 2, 3 etc from the beginning. 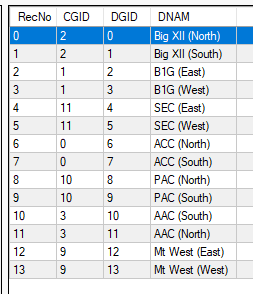 If you want to use different conferences, you can reference the CONF table for the CGID of each conference. By default:

The next step is to change the division values for each team.

The next step is to change the division values for each team.

The final step is to add the conference championship games to the database! To do this go to the BOWL table. 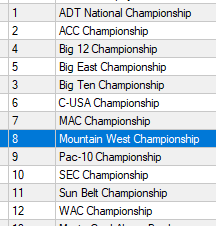 6. Set the UTID (Trophy ID) to the correct trophy number. You can use my example below for reference to the UTID values.

You can change the Stadium (SGID) by looking up the stadium value in the STAD table.

You should also update the BMON and BDAY (Month and Day) to the beginning of December.

The rest of the values, you should just use what I have by default, unless you know what you're doing. 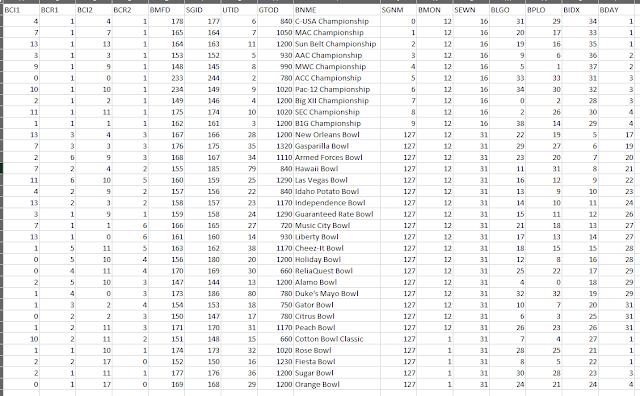 Remember for every bowl game you add, you have to remove one to make it work, starting with BIDX 0. So replace those lower bowl BIDX games with the championship games, but set the numbers starting at 33 and onward. All championship games should be 28 or higher.